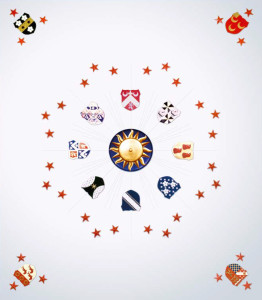 This immediately introduces the interior work of Schomberg Scott who, unusually for an architect of the 1960s, himself designed many of the details including some of the furnishings and the heraldic wallpaper in here (recently renewed in pale blue). The floor is of a polished blue Westmoreland slate, and the wrought iron balustrade of the gallery is a fine example of modern Scottish craftsmanship carried out to Schomberg Scott’s design. Schomberg Scott also designed the heraldic plaster ceiling which has the Sun in splendour and the Kerr stars as well as painted shields showing the arms of successive wives of the Marquises of Lothian.

Around the central sun:

In the four corners:

The Duke of Schomberg, by Kneller

This heraldry acts as an introduction to the post-union history of the Lothian family which Monteviot encapsulates, whereas Ferniehirst Castle to the south of Jedburgh represents the older, Scottish history of the Kerrs. The 1st Marquis was a supporter of William III and also of the Act of Union, and successive generations have intermarried with prominent English families, notably the Norfolks, premier Dukes, and the Shrewsburys, premier Earls of England, and heiresses who brought English houses and estates: Blickling in Norfolk (now National Trust) and Melbourne, Derbyshire, which is now the home of Lord Lothian’s brother, Lord Ralph Kerr.

This room is also an introduction to the Lothian picture collection which, as well as comprising a long series of family portraits,, is also rich in Dutch and Italian Old Masters collected in the Eighteenth and Nineteenth Centuries and formerly at Newbattle Abbey, near Dalkeith.

On the east wall is a large equestrian portrait by Godfrey Kneller of the Duke of Schomberg, William III’s General at the Battle of the Boyne and great-grandfather of the wife of the 4th Marquis of Lothian. Above the gallery is a portrait of Miss Lemon, reputed mistress of and described as ‘after’ Sir Anthony van Dyck. On the west wall is a fine portrait by George Knapton of the 3rd Marquis (1690 – 1767) in Thistle Robes. He sat at Westminster as a Scottish Representative Peer, and was Lord High Commissioner to the Church of Scotland on three occasions. Below is a family group by David Morier of the 4th Marquis (1710 – 1775) and his wife Caroline, daughter of the Earl of Holderness. The 4th Marquis pursued a military career and fought at Culloden, commanding ‘Kerr’s Horse’, later the 11th Dragoons, a force which the family raised in the Lowlands.

The Old Masters in here include: Shepherd playing his Pipes by Jacob Backer and a portrait of a Young Girl as a Shepherdess ‘after Paulus Moreelse,’ and landscapes by Van Huchtenberg and Jan Breughal flanking the Hunter portrait on the south wall.

The Victorian Newbattle Table has a marquetry top composed of all the wood grown on the estate there.

Photographs in the Square Hall show among others the present Marquis of Lothian with former President Bush, former US Secretary of State Condoleeza Rice and President Mubarak of Egypt.