The major addition to the house in 1962-3 was this large hall, which was conceived of as a general place of assembly and focus for the house, and as a gallery for the display of the larger family pictures from Newbattle Abbey.

It is entirely a Schomberg Scott design with a Scottish wagon ceiling (inspired by Falkland Palace), the gallery and stairs having a wrought iron balustrade made in Edinburgh. Schomberg Scott also designed some of the furniture, including the tables between the windows and the upholstered benches in the gallery. The floor is of African mahogany, a hardwood much used by architects in the 1960s.

The room was designed especially for the full-length equestrian portrait of Charles I by Van Dyck which dominates the east wall. This is a contemporary version of that painted for the gallery at St. James’s, which is now at Buckingham Palace, and was probably a gift from the king to his old tutor Robert 1st Earl of Ancram. It is flanked by portraits of the Earl of Ancram himself by John Eyke (1618), and his second wife Lady Anne Stanley, daughter of the 6th Earl of Derby.

Much of the lower part of the south wall is filled with a long frieze-like Venetian painting of the Parable of the Prodigal Son by Bonifazio Pitati. This was acquired by the 8th Marquis from Alton Towers in Staffordshire, seat of the Earls of Shrewsbury in 1857. It is flanked by portraits of an Eighteenth Century naval officer, possibly Captain Michael Kerr, by Michael Dahl and a portrait of Joan Queen of Naples, after a lost original by Bernardino Licinio.

Beyond, hanging over the Regency card table, is a fine imaginary classical landscape by John Wootton, which shows the strong influence of Claud Lorraine on English Eighteenth Century art. Wootton is better known for his horse paintings, but this shows his talents as a landscape artist.

The large portrait hanging over the staircase is of the 4th Marquis of Lothian (the Hanoverian cavalry officer) and his family by Joseph Anton Adolf. Below it, at the foot of the stairs, is a self-portrait of Sir John Medina, the distinguished Scottish late Seventeenth Century painter. Along the gallery are hung several smaller Seventeenth Century portraits.

Between the windows on the north side of the room is a portrait by Francis Cotes of John Hobart, Earl of Buckinghamshire, from whom was inherited the silver wine cooler. He had a distinguished political career, and as well as being ambassador to Catherine the Great, he was also Viceroy of Ireland. Next along is a portrait of Sir Thomas Overbury (who was probably murdered by the Countess of Somerset). At the east end is a portrait of the 3rd Marquis and his younger brother Lord Robert Kerr as boys, by William Aikman. As part of their education they went on an extended Grand Tour of Europe and the 3rd Marquis began the collection of Continental paintings which continued to be added to in the Nineteenth Century. There are also portraits of Robert 1st Marquis of Lothian and his wife Lady Jane Campbell, the latter attributed to David Scougall. 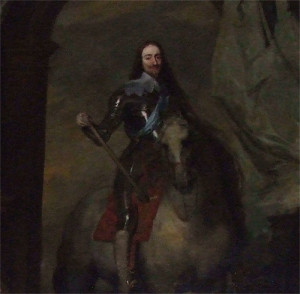 The best piece of furniture in the room is the Seventeenth Century cabinet on stand, between the windows, decorated with seaweed marquetry. On the first landing of the main staircase there is a small German cabinet with fine architectural marquetry which contains a collection of Grand Tour moulds of antique (Roman) gems. Opening from the north east corner of the hall, a passage leads to two private rooms contrived by Schomberg Scott between the Georgian house and the Blore wing.