Intended as the principal dining room of the house, this occupies the ground floor of the Blore wing. The attractive ribbed plaster ceiling has plaster stars, derived from the Kerr arms. The room was redecorated by Schomberg Scott who was responsible for the heraldic wallpaper which incorporates the Thistle for Scotland, the Rose for England and the fleur-de-lys for France. It commemorates James V of Scotland whose mother was English (Margaret Tudor) and wife French (Mary of Guise). The chandeliers were also designed by Schomberg Scott and complete his unified conception of the decoration. Much of the distinction of the room derives from the series of full-length seventeenth century portraits in matching eighteenth century frames, originally at Newbattle Abbey. 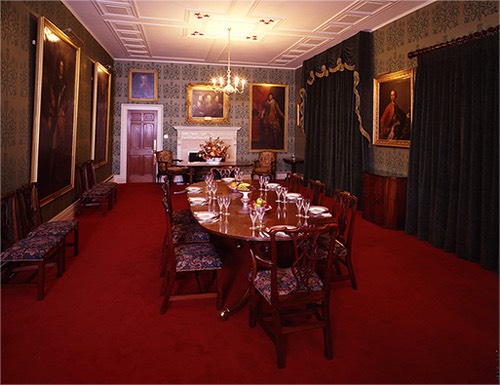