This occupies the ground floor on the original lodge. The lower ceiling recalls the older proportions while the Eighteenth Century plan is commemorated by the projecting bookcases which mark the lines of the original dividing walls between two rooms and a central entrance hall. The present appearance of the room is due to Schomberg Scott who designed the twin fireplaces and the whitepainted bookcases, as well as the vividly coloured ceiling paper inspired by fragments of a Sixteenth Century Scottish painted ceiling in his own house at Prestonpans. 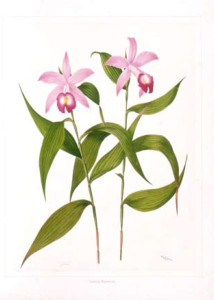 The books which form a typical family collection of bibles, classics, topography, history and architecture, date mainly from the Sixteenth to the Nineteenth Centuries and came from the library at Newbattle Abbey, formerly the Midlothian seat of the Marquises of Lothian, now an adult education college. (Most of these are now in the ownership of the National Library under terms of the will of the 11th Marquis). In addition, a particular treasure is the large set of water colours of orchids and fungi. These were painted in 1880 and 1892 by Miss Florence Woolward for Schomberg, the 9th Marquis, one of whose enthusiasms was the cultivation of orchids and of which he formed the largest private collection in the U.K. at Newbattle Abbey.

Over the west chimneypiece hangs a portrait of Robert, 1st Earl of Ancram by Hercules Sanders dated 1653. This shows the Earl as an old man in exile in Holland after the Civil War. Like many Scots nobles, he had accompanied James VI to London after the latter succeeded Elizabeth on the English throne. He was a prominent figure at court, serving as tutor both to Henry, Prince of Wales and to Prince Charles to whom he remained loyal till the end. He was also a poet and philosopher. His eldest son, William (whose portrait hangs in the dining room), unlike his father was a strong covenanter and supporter of Cromwell; he succeeded, through the female line, as 3rd Earl of Lothian while Robert’s younger son succeeded as 2nd Earl of Ancram. Both titles were to come together in the Eighteenth Century, and Robert Ancram is the principal progenitor of the distinguished Anglo-Scottish family whose portraits are all here at Monteviot. Robert Earl of Ancram and William Earl of Lothian remained on good personal terms, despite being on opposing sides in the Civil War, and co-operating to arrange the Grand Tour of William’s sons. 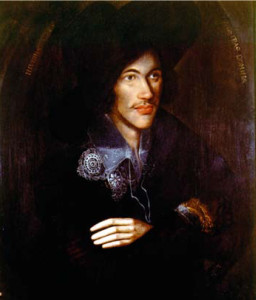 Portrait of John Donne by an unknown artist

Over the east chimneypiece is a contemporary Chinese copy of the famous early portrait of John Donne, poet and Anglican clergyman , the original of which used to hang there but is now in the National Portrait Gallery in London. He was a friend of Robert, Earl of Ancram. The original picture was bequeathed to Lord Ancram by Donne, but only identified and ‘rediscovered’ in 1958. It is irreverently inscribed ‘Illumine Tenebra Nostras Domina’, and shows Donne painted in shadows and ‘my black melancholy hat,’ more as the author of the love poems than the Anglican Divine who became Dean of St. Paul’s Cathedral in London. The artist was unknown.

On the east wall is a portrait of the wicked Countess of Somerset, daughter of Thomas Howard, 1st Earl of Suffolk. She divorced her first husband, the Earl of Essex, on the grounds that he was ‘impotent with none but her,’ and married the more handsome Robert Kerr, Earl of Somerset. She narrowly escaped being executed for the murder of Sir Thomas Overbury who had tried to dissuade Kerr from the marriage and was mysteriously poisoned. The Somersets were banished from Court, though spared the axe; James I remarked that being married to each other would be punishment enough.

The two little paintings of figures in architectural settings, which hang on the ends of the projecting bookcases, are characteristic works of Hendrick van Steenwick. They are dated 1676 (although invoices show that they were at least 15 years earlier) and show St Jerome in his study (with tame lion) and The Blind Isaac being deceived by his wife Rebecca.

From the windows are good views over the herb garden with its geometrical pattern of box-edged beds designed by the 9th Marquis, who was a keen gardener and talented amateur architect as well as one of the leading public figures of his day.