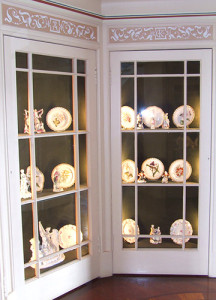 The name is a joke on the part of Schomberg Scott and alludes to the frequent complaint, before remodelling this part of the house, that it was impossible to find your way through the maze of Victorian additions. The hardwood floor is inlaid with a marquetry compass. The octagonal space is lined with glazed china cupboards containing more of the Derby service as well as Sevres biscuit and coloured porcelain figures from the Derby, Hochst, Meissen and other Eighteenth Century factories. Such figures were originally intended as table decorations for dessert and the ideas evolved from sugar confectionery. The frieze is painted with the initials of the children of the 12th Marquis and Marchioness: Mary, Michael, Cecil, Clare, Elizabeth and Ralph.