This occupies the ground floor of the Blore wing and was intended as the principal dining room of the house, a function it still fulfils. The attractive ribbed plaster ceiling has plaster stars, derived from the Kerr arms. The room was redecorated by Schomberg Scott who was responsible for the heraldic wallpaper which incorporates the Thistle for Scotland, the Rose for England and the fleur-de-lys for France. It commemorates James V of Scotland whose mother was English (Margaret Tudor) and wife French (Mary of Guise). This has recently been reprinted to the original design. The chandeliers were also designed by Schomberg Scott and complete his unified conception of the decoration. 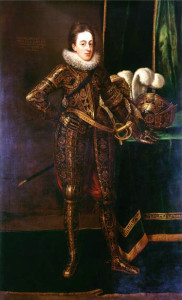 Charles, The Prince Of Wales

Much of the distinction of the room derives from the series of full-length, Seventeenth Century portraits in matching Eighteenth Century frames, originally at Newbattle Abbey. These include Charles Prince of Wales (the gilt armour he is wearing is now at Windsor Castle); the 2nd Marquis of Lothian, by Sir John Medina; William, 3rd Earl of Lothian ‘the Covenanter’, by David Scougall; and the Earl of Argyll, another covenanter, by Duchappell. Over the chimneypiece is a contemporary version of the Van Dyck triple portrait of Charles I. This was a gift of the King to his minister Lord Strafford (executed in the run-up to the Civil War). It formed part of the Hobart bequest inherited from Lady Londonderry (youngest daughter of the last Earl of Buckinghamshire) by the 7th Marquis. Between the windows is to be found a portrait attributed to Knapton of Lord Robert Kerr, younger son of the 3rd Marquis of Lothian who was killed at Culloden, and a portrait of Lord Newbattle (later 5th Marquis) dated 1762, by Robert Hunter. Over the sideboard at the east end of the room is an unusual equestrian portrait of the 4th Marquis of Lothian by David Morier (1751), which was for many years on loan to the British Embassy in Washington and has only recently been brought back to Monteviot. Over the doors are smaller portraits of the 3rd Marquis by Michael Dahl, and the 3rd Earl of Leicester, dated 1632 by Cornelius Johnson, and beside the door into the Great Hall another portrait of the military 4th Marquis, now attributed to Ramsay.